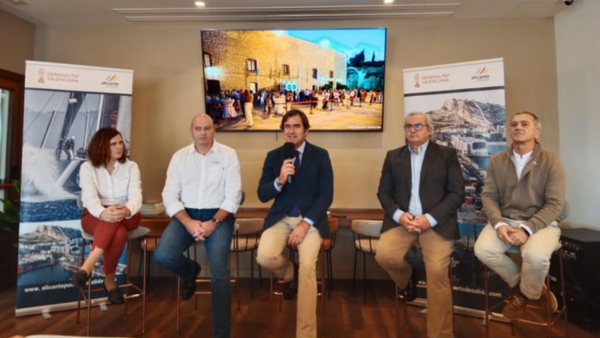 Posted at 12:18h in english by Comunicacion

It will organize two regattas, one for Cruisers and one for Optimist during the two weekends of the event

Alicante (05 December 2022) – The Real Club de Regatas de Alicante and the Society for Digital Transformation (SPTD) have joined synergies and the centenary club, flagship of the city, will become sponsor and sporting host of Alicante Puerto de Salida, thus participating in the celebration of various events, both sporting and social related to The Ocean Race.

This Monday at the Real Club de Regatas de Alicante the club presented its sponsorship of Alicante Puerto de Salida, with the participation of President Miguel López Barbero; the President of the Sailing Federation of the Valencia Region, Carlos Torrado; the Deputy Director of SPTD, Rufino Selva; Estefanía Esteve, Financial Director of The Ocean Race and the Water Operations of Alicante Puerto de Salida, David María.

This will be the first time that the Real Club de Regatas actively participates in the start of The Ocean Race, which this edition will be the fifth to start from the Valencia Region. To this end, a series of events have been organized to mark the occasion of this event with worldwide repercussions. The Real Club de Regatas de Alicante was present at The Ocean Race Europe, in what was the first direct contact with both the organization of The Ocean Race and Alicante Puerto de Salida. The relationship was excellent, so now the collaboration is once again mutual between club and organization.

The club will organize two regattas, the weekend of January 7th the cruisers will be the protagonists, and an appeal is made to the boats from the surrounding ports to participate and during that week they can stay at the Real Club de Regatas and the following weekend to be present at the start of the round the world regatta, which will take place on Sunday January 15th. On Saturday 14th an Optimist regatta will be organized under the format of Team Racing, which will take place in the same dock of the port of Alicante, where teams from various clubs in the Comunitat, will compete and receive their prizes in the Ocean Live Park, the nerve center of the port of departure.

During the week the women’s team Rema Vida will also carry out several actions in the dock next to the Ocean Live Park, as it did in 2021 on the occasion of The Ocean Race Europe, which was a success.

On a social level, two talks will be held at the Real Club de Regatas, one on Sustainability and the Environment and the other on Women’s Sport, both coinciding with the week of events for The Ocean Race.

The Real Club de Regatas de Alicante will also host a Mexican party in honour of Viva Mexico, one of the VO65s taking part in this edition of The Ocean Race.

The President of the Real Club de Regatas de Alicante, Miguel López Barbero explains that “one of the objectives set by this board of directors was this. In other editions the club had not had enough participation in an event as important for sailing and sailing as the start of The Ocean Race. We are strengthening our relationship with the organization and whatever we can do to help with the organization, the Real Club de Regatas will be there” and he points out that “Alicante is a very cosmopolitan city, people come from all over and we believe that sailing and the club’s job is to popularize sailing“.

Rufino Selva thanked “the Real Club de Regatas de Alicante for its sponsorship and we want in this way to lay the foundations for the future and that the club becomes a base of operations and that with its actions at sea with the two events it will organize with the cruisers and Optimists, as well as collaborating with the Academy of The Ocean Race” and added that “we want the yacht clubs to become the real sporting hosts of this international competition in the logistical, technical and participatory aspect“.

Estefanía Esteve explained that “since 2008 The Ocean Race has been linked to the city of Alicante and we are very happy that the start of the 14th edition will be from here. We thank the Real Club de Regatas de Alicante for their involvement, as they did last year”.

Carlos Torrado as the highest representative of the federation said that “from the FVCV we are on the side of sailing and all the events of the clubs that organize regattas and more in this case of the start of the round the world regatta, which represents a pride that comes from our community”.

David María made a technical review of what will be the start and emphasized that “for the Optimist children of the Real Club de Regatas as well as the rest of the clubs that participate in the regatta, it will be something they will never forget in their lives”.

During the event, promotional images of Alicante Puerto de Salida, The Ocean Race and Tabarca Vela, the star regatta of the Real Club de Regatas de Alicante, included in the national circuit of high-level cruises, were display