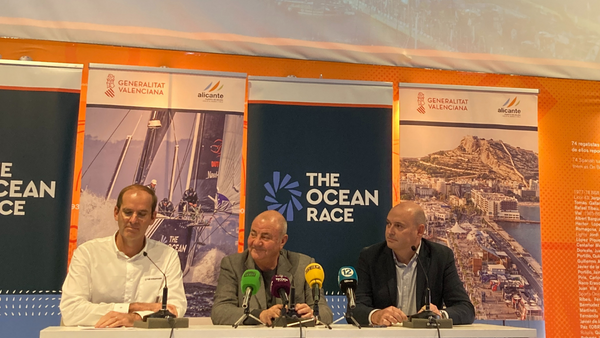 01 Dec Alicante Port of Departure will be the epicentre of sailing, gaming and music for The Ocean Race

Posted at 14:12h in english by Comunicacion

The Generalitat Valenciana has programmed a complete offer for all audiences at the Ocean Live Park from the 7th to the 15th of January.

Alicante, Thursday, December 1, 2022.- The Generalitat Valenciana, through the Department of Innovation and the Society of Projects for Digital Transformation (SPTD), will turn the Port of Alicante into an exceptional meeting space where an extensive participatory program will be offered with a wide variety of sporting, exhibition, gastronomic, cultural, recreational, educational, musical and technological activities for all ages.

The Ocean Race is a great sporting event and one of the toughest and longest team regattas in existence, as participants face the great challenge of sailing around the world. New for this edition will be two classes of boats: the high-tech IMOCAs and the VO65 monotypes. The regatta will last six months and will make stopovers in a total of 7 legs passing through the following cities: Alicante, Cape Verde, Cape Town, Itajaí, Newport, Aarhus, Kiel Fly-by (a beacon passage), The Hague and Genoa.

SPTD General Manager Antonio Rodes, SPTD Deputy Director, Rufino Selva and the President of The Ocean Race, Richard Brisius, presented this Thursday at a press conference the program designed especially for the enjoyment of the public of all ages, mostly free of charge, around the values of sailing, sustainability and innovation, in the different areas of the Ocean Live Park (former Race Village).

SPTD CEO, Antonio Rodes, has emphasized Alicante’s close and fruitful relationship with the organization of The Ocean Race, as the current home of the legendary regatta, the site of its museum and host port for the last four starts of the race since 2008. He also highlighted the impact that the organization of the Sailing Tour of the World has had and continues to have for Alicante and the region as a whole, both in terms of international tourism and in terms of the economic and social impact it represents.

“The aim of the Generalitat is to ensure that this edition of The Ocean Race is once again an element of economic dynamism and tourism promotion, both for the city of Alicante itself and for the province and the Valencian Community as a whole,” said Rodes.

In this regard, the SPTD CEO recalled that the 2017-18 edition broke records at all levels. “There were more than 2.5 million fans who attended the race’s stopovers, putting The Ocean Race in the top tier of international sporting events, while setting new records in both fan interaction and media coverage.“

In addition, he added, “millions of people followed the action across digital platforms, television and news, making the regatta a record-breaker in terms of international coverage“.

“For all these reasons, the importance of the Sailing Tour of the World in the Valencian Community is evident. Hosting the start of the regatta in 2017 in Alicante generated the equivalent of 1,270 jobs and contributed 68.6 million euros to the Gross Domestic Product (GDP) of the Comunitat and if we take Spain as a reference, the impact would amount to 1,700 jobs and 96 million contribution to GDP.“

“The regatta had a fiscal impact of 41 million euros, a very relevant data when valuing this event. But in the last edition, it was not only the economic data that was relevant, but also the promotion of such essential values for our society as care for the environment, solidarity and participation,” he also commented.

The President of The Ocean Race, Richard Brisius, recalled the link with Alicante, which dates back to 2008, and encouraged visitors to take part in the Ocean Live Park activities for the 14th edition of the regatta, which will set off from Alicante on January 15th. “With less than 6 weeks to go until the Ocean Live Park opens we are looking forward to welcoming the teams, who will start setting up in Alicante from next week and include some of the best ocean sailors in the world.”

A PROGRAM FOR EVERYONE

The Deputy Director of SPTD, Rufino Selva, has advanced that the Ocean Live Park will be the meeting place par excellence for the thousands of visitors who will pass through this space, as well as for the teams and sponsors.

“Alicante Puerto de Salida will be an exceptional meeting point for leisure and fun, with two ceremonies – opening and closing – street shows by the Fragua de Vulcano, concerts, mascletás, fireworks, a varied gastronomic offer, a special area for Gaming and eSports activities“, he has detailed.

In addition, there will be an extensive program of educational activities, around the values of sustainability and respect for the environment, with school visits, talks, competitions and children’s workshops, and will affect the world of sailing with ‘Try Sailing’ daily sailing and the opportunity to follow the training of the boats participating in the regatta and to visit the areas dedicated to sustainability, such as the One Blue Voice pavilion.

The activity of the Ocean Live Park will start at noon on Saturday, January 7, with the opening ceremony of Alicante Puerto de Salida, which will feature a unique show in Spain with puppets and giant mobile sculptures, whose theme will revolve around the marine world, by Carros de Foc.

That day, the public will be able to enjoy Marshalls training sessions, children’s workshops throughout the day, Gaming and eSports activities, pirate-themed street shows and the Try Sailing open doors program, to close with a fireworks display, and the Viva Suecia + Second music concerts from 8:30 p.m. onwards.

Throughout the week, the Ocean Live Park will offer a complete program in different differentiated spaces, such as the one dedicated to Gaming and eSports Alicante Digital Gaming, which will be the epicenter of an intense activity with youtubers, influencers and gamers who will show young people how to compete in this universe of innovation and technology. This space will also have an Escape Room and virtual reality area, video games for all audiences, and educational talks for parents and teachers, among other activities.

As for the musical and leisure program to be held in the concert area set up at Pier 14, which will be the only shows mostly paid. In addition to the concerts of Viva Suecia + Second scheduled for Saturday 7, Sunday January 8 will feature the concert of ‘Destripando la historia‘, at 12:30 pm, aimed at a family audience.

On Friday January 13, at 20:30 pm, will feature Cheti, and on Saturday January 14, at 12:30 pm, the Ocean Live Park will host the musical show Rock in family, both free of charge. That same day, at 20:30 hours, Alicante Puerto de Salida will offer the double concert of two bands that will delight the audience, Sidecars and Sidonie.

To complement the offer of leisure and fun, the Ocean Live Park will have different points of restoration with the so-called Food trucks, provided with food from different cultures of the world and a special area of healthy eating.

The highlight of the program will focus on Sunday January 15 on the closing ceremony, at 12:30 pm, with the show Magic Stairs by Carros del Foc, the participation of the Eagle Patrol, and the launching of a firecracker and salvos that will accompany the Departure Ceremony, to finally give way to the departure of the offshore boats during the afternoon.

ALICANTE LOOKS TO THE SEA

The program will focus especially on those activities aimed at bringing the public of all ages to water sports. In this sense, Alicante Puerto de Salida has organized daily practices of Trail Sailing, aimed at schoolchildren with morning hours from Monday to Friday and open to the public in the evenings and weekends, as well as baptisms of sea, talks and educational workshops around sustainability in the marine environment.

In this regard, it should be noted that on the two weekends from 7 to 15 there will be nautical competitions organized in collaboration with The Ocean Race and the Real Club de Regatas de Alicante (RCRA).

As in previous editions, Alicante Puerto de Salida has put together a full volunteer program involving around 250 people, who will support the organization of all the activities planned for this great event. The University of Alicante and the University of Miguel Hernández de Elche (UMH), among other organizations and entities, have collaborated in the call to the public.