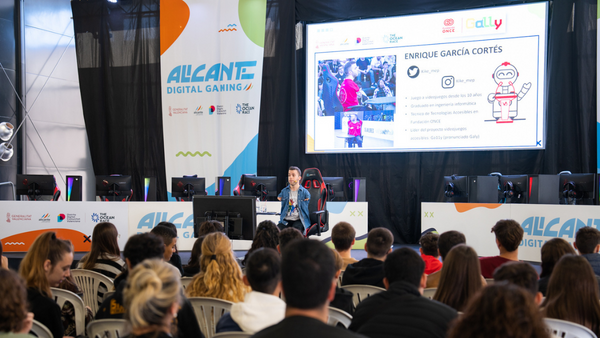 Posted at 14:15h in english by Comunicacion

This year’s edition of Alicante Port of Departure was visited by 303,000 people from 7th to 15th January, with a daily average of 35,000 visitors, the highest figure of the five editions, with Saturday and Sunday being the busiest days.

The Ocean Live Park, in the area of the Levante Docks, became an exceptional meeting place with an extensive participatory programme of sporting, exhibition, gastronomic, cultural, leisure, educational, musical and technological activities for all ages.

In the case of Alicante Digital Gaming, the 1,200 square metre space dedicated to the world of esports and video games, brought together a public of all ages who were able to enjoy a full programme of free activities, such as competitions, talks and meetings with youtubers, influencers and gamers who showed how to compete in this universe of innovation and technology.

The programme, designed by the company GGTech Entertainment, -associated with the company awarded the contract for this area Esatur Servicios- included more than 60 tournaments, prizes, freegaming areas, virtual reality experiences and maritime videogames and an escape room area. Visitors were also able to watch live shows by renowned influencers and youtubers such as Carlitos, Ache, Suja, Nakoo, Deqiuv and Imantado.

This space also had an information point to answer any questions about this space and even to collect the CVs of those interested in working in the video games sector.

Another of Alicante Digital Gaming‘s most popular programmes was Junior Esports, an educational and technological project in which nearly 400 students from schools in the province took part. These students were also able to enjoy workshops in which they talked about internet security, the importance of physical exercise when playing video games and the professional opportunities offered by the gaming sector, as well as video games and accessibility.

In this regard, it is worth highlighting the participation of the National Police Force, which took part in these talks on cybersecurity, in which the audience was shown the different tools available to surf and play safely on the Internet. For their part, representatives of the ONCE Foundation, with their Gal11y adapted games project, explained the different possibilities that exist for people with disabilities to fully integrate into the world of gaming.