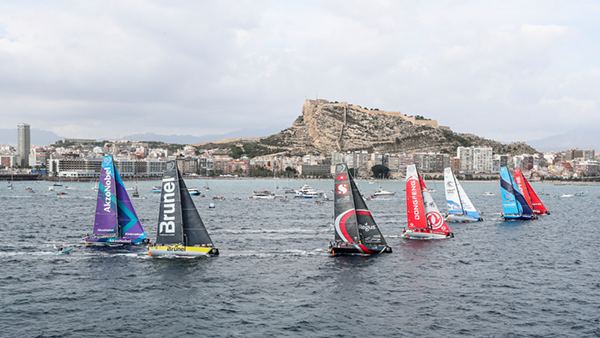 Posted at 11:58h in english by Jessica

Alicante, Monday, June 7, 2021.- The Ocean Race team and the Generalitat Valenciana, through the Thematic Projects Society of the Valencian Community (SPTCV), in collaboration with the Alicante City Council, the Real Club de Regatas de Alicante (RCRA) and Alicante Port Authority have finalized the entire program of activities for the only stopover in the Spanish Mediterranean for a new competition, The Ocean Race Europe (TORE), scheduled for the Port of Alicante on the night of day 9 and until Sunday June 13.

This new competition constitutes an exceptional international nautical event, framed in the context of the great ‘Around the World Sailing’ The Ocean Race, whose Port of Departure has been Alicante in the last four editions and will once again be the Port of Departure in October of 2022. This new continental event will be held every four years (2021, 2025 and 2029), with a route of more than 2,000 miles (3,218 km) from the start in Lorient (France), passing through Cascais (Portugal), Alicante and finally Genoa ( Italy).

One of the main attractions of this sporting event lies in the number of participating teams, twelve in total, in the previous edition of the round the world 7 teams competed and in that, for the first time, two fleets have been introduced in action: the IMOCA class, of the latest technology, and the VO65 monotypes, used in the last two transoceanic regattas of The Ocean Race.

The boats have left this Sunday from Cascais and are scheduled to arrive at the Port of Alicante late on the 9th or early hours of the 10th of June, depending on the wind and sea conditions.

Once in Alicante, the high-performance ocean yachts will remain in the Dock 12 area until their departure on Sunday, June 13, so that the public who wishes to will be able to contemplate the spectacular VO65 and IMOCA 60 from land during their entire stay in Alicante. Alicante.

Given that the context of the current health situation has made it impossible to organize mass face-to-face activities in the Port of Alicante area, the actions related to this edition of The Ocean Race Europe will be carried out entirely in virtual format. However, different actions have been arranged in collaboration with the concessionaires of spaces in the port of Alicante for various gastronomic, recreational, musical promotional activities, etc., both in the spaces of Pier 12 and with Marmarela.

SUMMITS ON SUSTAINABILITY AND ENVIRONMENT

In this sense, it is worth highlighting the celebration of two Summits focused on issues of sustainability of the marine environment and climate change:

This webinar will feature the participation of experts from the digital hub companies Dinapsis, Ikitech and Spadrone, who will give details of the technological projects developed by their respective companies to offer effective solutions that allow us to care for and protect the oceans.

This Summit will be broadcast live on the Digital District YouTube channel. https://www.youtube.com/c/DistritoDigitalCV

The list of experts that will take part includes the President of the European Commission, Ursula Von Der Leyen, and Virginijus Sinkevičius, European Commissioner for the Environment, Oceans and Fisheries, who will talk about how the EU will introduce the blue of the oceans in the Pact European Green and how the Union could be at the forefront of protecting the ocean and the planet.

The Spanish representation will be headed by Teresa Ribera, fourth vice-president and minister of Ecological Transition of the Government of Spain, who will speak about the need to protect 30% of the oceans by the year 2030. This Summit will be broadcast live on YouTube channel: The Ocean Race: Racing with Purpose.

One of the activities that will be face-to-face and can be enjoyed by the Alicante public will be the nautical competition ‘Hogueras Trophy’, organized by the Real Club de Regatas de Alicante (RCRA), on Saturday, June 12, starting at 11 a.m. :00 hours. This level 2 event takes a coastal course and is scoring for the 2021 RCRA League A2.

The stay of The Ocean Race Europe boats in Alicante for four days will be an important shock in terms of impact on national and international media and visitors, which will have a great economic impact on the city. The concessionaire establishments in the leisure area of ​​the Port will have scheduled activities to entertain the public within the current health regulations, and for this they have coordinated their activity with SPTCV.

This is the case of Muelle 12, which has prepared a special program with exclusive activities including international wine and cheese tastings, concerts, monologues, as well as a “Gastro-route” in which 5 restaurants will prepare their proposal in tribute to each of the teams participating in the competition.

The entire program of activities is available on the website and social networks of Muelle 12. Precisely because of the context caused by the pandemic, the scale of the TORE in Alicante is of special interest, since it represents a stimulus for the small local business, restaurant and hotel sectors, since it will require some 650 hotel beds for the teams participants and will attract the public to the city of Alicante. In addition, it will contribute to improving the international projection of tourism in the Valencian Community.