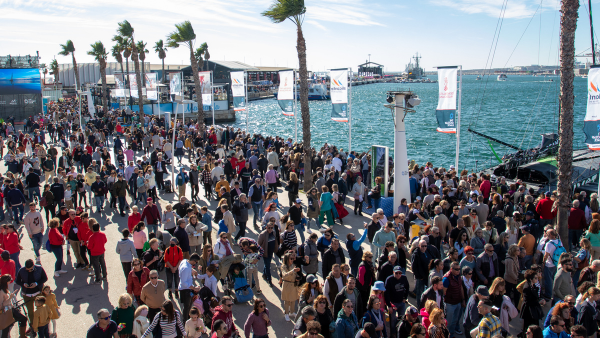 16 Jan Alicante Port of Departure is visited by 303,000 people during the week and records the highest figure of all editions with an average of 35,000 daily visits

Posted at 13:39h in english by Comunicacion

More than 170,000 people watched the start of the race from different parts of the city last Sunday.

Alicante Port of Departure has been visited by 303,000 people throughout the week, registering a daily average of 35,000 visits, the highest figure of all five editions, with Saturday and Sunday being the busiest days.

In addition, more than 170,000 people watched the start of The Ocean Race from different parts of the city last Sunday, as well as the aerial display of the Air and Space Army Eagle Patrol. These figures reveal the importance of the Sailing Tour of the World in the Valencia Region, whose only institutional sponsor is the Generalitat Valenciana.

The Regional Minister for Innovation, Universities, Science and Digital Society, Josefina Bueno, expressed her satisfaction with these figures and highlighted the great impact on the city and the exceptional technological and innovative projection of the event: “The Generalitat Valenciana is committed to combining technology and sporting competition. As President Ximo Puig said yesterday, the commitment to Alicante is unquestionable and we are working to make Alicante the definitive port for The Ocean Race“.

The Regional Government, through the Department of Innovation and the Digital Transformation Projects Company (SPTD), has organised this edition of Alicante Port of Departure, with an extensive programme designed especially for the enjoyment of the public of all ages and with concerts, technological activities, solidarity actions and children’s workshops, most of which are free of charge, based on the values of sailing, sustainability and innovation.

Sunday was the last and great day of the Alicante Port of Departure programme, which since 7 January has been offering an extensive programme of leisure activities based on nautical sport, innovation and environmental sustainability.

The Air and Space Army aerobatic patrol performed an emblematic flight over the seafront of the city of Alicante, coinciding with the starting signal for the boats to undertake the transoceanic round trip.

Josefina Bueno highlighted the work done by Alicante Puerto de la Salida (APS) to raise awareness of environmental protection through the programme it has developed from 7 to 15 January.

Throughout the week, the Regional Minister has seen first-hand the development of the Alicante Aventura Junior school programme, which has been enjoyed by around 2,450 schoolchildren from Alicante’s educational centres. She has also met with various companies involved in technology and innovation, and has been keen to see first-hand the more social and charitable side of The Ocean Race, holding meetings with representatives of various associations in the province of Alicante which carry out activities related to the sea for the enjoyment and benefit of its users and which have their space in this event.

On the other hand, Alicante Port of Departure has carried out a volunteer programme for the organisation and development of this year’s edition of the Round the World Race. This initiative has made it possible to count on around 250 people who are lending their time and know-how to help make the event a success once again.

According to Josefina Bueno, “the fact that Alicante is the starting port for a round the world regatta such as the Ocean Race puts the city, the province and the Valencia Region in a preferential position at all levels. The Valencian Government believes that this is a commitment to the future“.