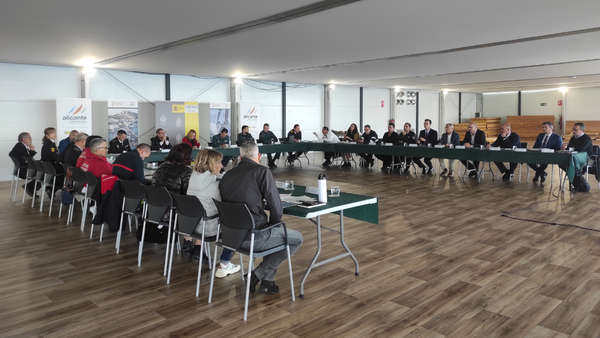 Posted at 11:55h in english by Comunicacion

The special security device around the start of the Tour of the World will have a thousand troops.

Alicante, Tuesday, December 20, 2022.- The Subdelegation of the Government in Alicante will coordinate a special security device on the occasion of the start of the Round the World of The Ocean Race, which will be provided with about a thousand members of the forces and security forces of the State, as well as members of the regional and municipal bodies, which will ensure the normal development of this great event, scheduled from 7 to 15 January.

With this objective in mind, the Government Sub-delegation has convened a coordination meeting on Tuesday with the participation of the Government Sub-delegate, Araceli Poblador, the Deputy Director of the Digital Transformation Projects Company (SPTD), Rufino Selva, as well as the main representatives of the National Police, Civil Guard, Regional Police, Naval Command, Ministry of Health, Maritime Captaincy, Alicante City Council, The Ocean Race, the Royal Yacht Club and the Port Authority of Alicante.

At the end of the meeting, held in the Alicante Digital Gaming marquee, Araceli Poblador stressed the importance of this type of meeting to “coordinate all the necessary efforts in an ambitious security plan for the upcoming start of The Ocean Race from Alicante”. Last year’s edition attracted some 350,000 visitors, and this year’s edition is also expected to be very well attended.

The Guardia Civil will be in charge of controlling and supervising security measures at sea. The head colonel of the Alicante Command, José Hernández Mosquera, explained that in the final phase of the event, from 13 to 15, the Civil Guard will move to Alicante for this special device one of its largest ocean-going vessels, 65 meters in length, which can be visited by the public.

In the same way, the public will also be able to visit other two institutional ships of the Navy, a corvette and a frigate, during the weekends, and will be able to see an aerial demonstration of the Eagle Patrol on the 15th on the occasion of the departure of the ships.

The Deputy Director of the Society of Projects for Digital Transformation, Rufino Selva, meanwhile recalled that Alicante Port of Departure is an event that “is declared of special interest” and stressed that the Generalitat Valenciana “makes every effort to develop in the best conditions for the enjoyment of all audiences and to prolong the activation of ancillary sectors, such as trade, hospitality and gastronomy”.

Rufino Selva also thanked the Government Subdelegation and all the security forces “The great device that will be deployed, and that will be the largest of the five editions with this one that will have Alicante Puerto de Salida”.